A Study of AI Population Dynamics with Million-agent Reinforcement Learning 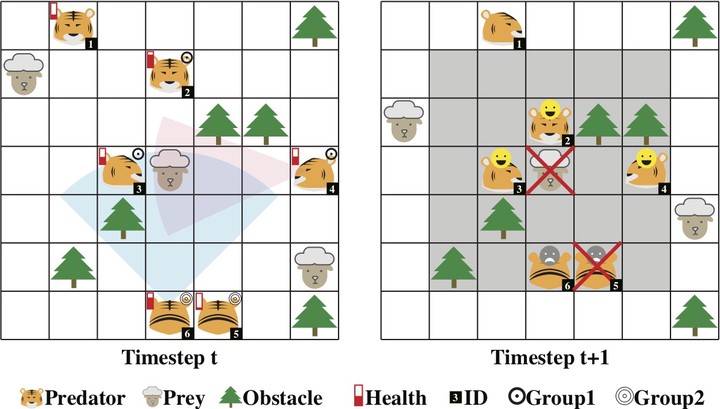 We conduct an empirical study on discovering the ordered collective dynamics obtained by a population of intelligence agents, driven by million-agent reinforcement learning. Our intention is to put intelligent agents into a simulated natural context and verify if the principles developed in the real world could also be used in understanding an artificially-created intelligent population. To achieve this, we simulate a large-scale predator-prey world, where the laws of the world are designed by only the findings or logical equivalence that have been discovered in nature. We endow the agents with the intelligence based on deep reinforcement learning (DRL). In order to scale the population size up to millions agents, a large-scale DRL training platform with redesigned experience buffer is proposed. Our results show that the population dynamics of AI agents, driven only by each agent’s individual self-interest, reveals an ordered pattern that is similar to the Lotka-Volterra model studied in population biology. We further discover the emergent behaviors of collective adaptations in studying how the agents' grouping behaviors will change with the environmental resources. Both of the two findings could be explained by the self-organization theory in nature."

My research interests include multi-agent learning and reinforcement learning..